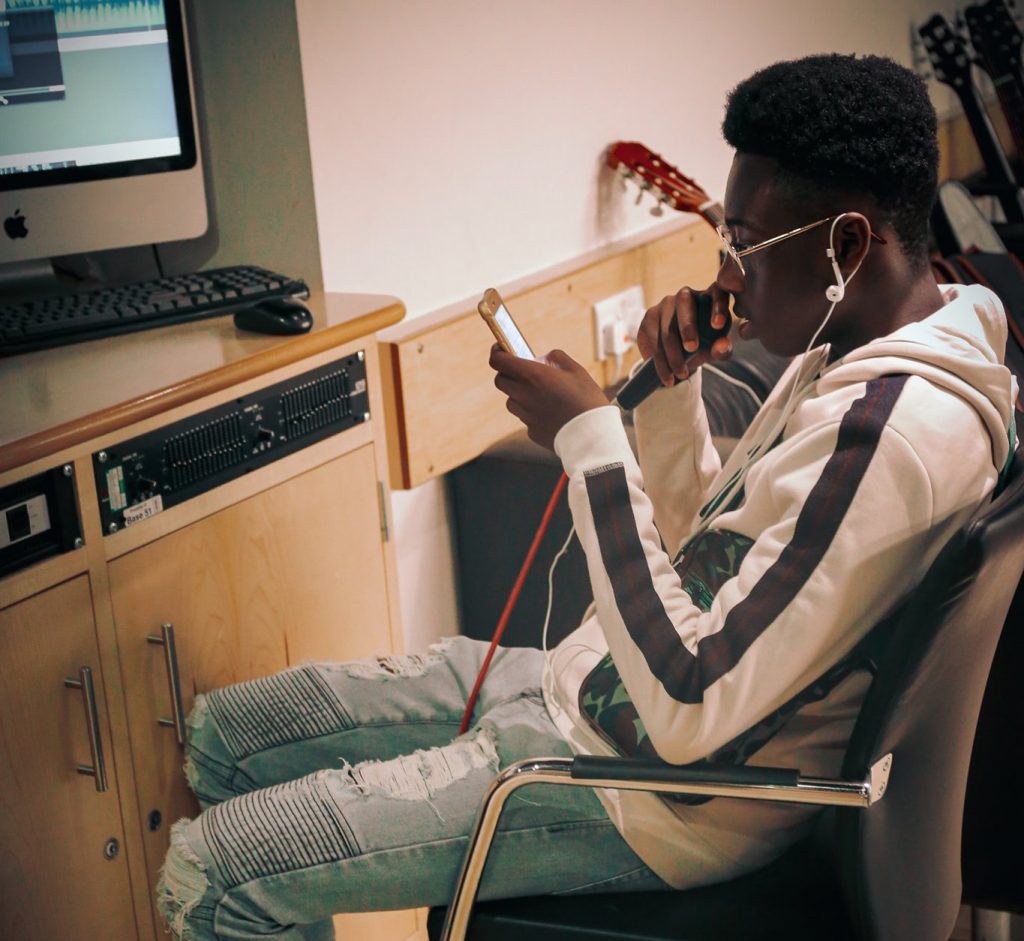 This week, we catch up with the young musician and rap artist to chat to him about his journey with YMCA Digital and the Young Creatives programme.

What made you want to get involved with YMCA Digital in the first place?

“I was posting a lot about my music on social media, on Instagram mainly, because I wasn’t sure how else to get it out there,” Fade explains.

“My friend Essence (another Young Creatives artist) then turned to me one day and said: ‘There’s a studio in town specifically for young people, you can make your way down in your own time and they’ll help you write and record your music – not only that, but they’ll teach you how to perform.’

“I wasted no time in getting down to YMCA Digital as I wanted to learn how to record straight away! It felt like that was the one thing in my life that I was missing – the technique and equipment that I needed to bring the visions I had in my head to life.”

Can you remember what your first sessions at YMCA Digital Young Creatives was like?

“I remember there were maybe three other people there as well as Colin (MC Spyda). MC Spyda is a legend, very respected in Notts for his unique vocal technique and delivery.

“It was the first time I had ever set foot in a recording studio or met a well-known artist, and at first I was quite nervous and overwhelmed. I was also amazed at all of the quality equipment in the studio! Over time, my confidence grew as MC Spyda and the other tutors working at YMCA Digital continued to guide me, always talking to me with respect and treating me as an equal, even though I didn’t have much experience. I felt like I could be myself around everyone.

How has your experience with YMCA Digital helped you grow as an artist?

“When I first started attending the sessions, I had a very closed mindset about lyrical content and what I wanted to write about. I was nervous and didn’t have much confidence in myself or my ability. After working with other artists and getting used to being onstage my confidence has grown so much, and so has my ability to hold a crowd. When I first started, I could rap my bars, but I don’t think I was very entertaining! I’ve met so many new, inspiring people through YMCA Digital who drive me to be better, perform better, and write better.

“I had no idea how to mix songs when I first joined YMCA Digital – I thought you just recorded them and bam that was it, I had no idea of the amount of work and fine tuning that goes into recording. From working with Ben (Trekkah) and Colin, I can now do a lot of the aspects of mixing by myself.

“I’ve had the opportunity to perform at loads of venues in Nottingham, including Café Sobar and Metronome for the RISE UP! event with the SEND Project and CRS Studios. It was fantastic to perform in front of the public, to network with other musicians, music labels and industry professionals and to see what is possibly for my future. I met people at those events that I could collaborate with in the future, they really opened doors for me.

Do you think your lyrics and the things you write about have changed since starting with YMCA Digital?

“A lot of people who used to influence me would write about boring, self-centred things, and back before I started I used to think I had to write about that kind of stuff to, just to fit in. About money and fame and stuff like that.

“After working with MC Spyda, he taught me to see the bigger picture and to write about stuff that matters to me. I write about my friends, my family, about my team at NGY MyPlace, about politics and things that affect every-day people in Nottingham, things that people can connect to and feel passionate about. It’s all about creating a community with music.

What projects are you currently working on?

“Since July, I’ve been working on an EP – I’ve been collating beats from lots of different producers and working on lyrical content. I’ve been trying to branch out with my themes and to address different topics, stay tuned to hear my new songs!

“When the EP is done, I’d love to get started writing my first album! I couldn’t ask for a better team to work alongside.

Why do you think programmes like YMCA Digital are important for the local community?

“There are a lot of recording studios in Nottingham, but a lot of them don’t have the diversity that NGY MyPlace has in terms of offering help to young people from different postcodes – some studios refuse to work with you if you’re from certain areas of the city.

“YMCA Digital doesn’t discriminate; they work with any young person who has a passion to learn and grow. Everyone is accepted here.

Where do you fee yourself taking your music in the future?

“I know that after I leave the Young Creatives, I want to explore the world, spreading my music as far as I can. YMCA Digital has given me the confidence to do that, to make connections and establish myself on a local and national level.

“When you’re 18 and leave the programme (because it’s for young people!) I feel like the next best thing you can do is become a part of the YMCA Digital staff team, and volunteer here to help more young people achieve their dreams.

“I would like to come back to NGY one day, to help other young people like me, and others who have it way worse than me. I’d like to give something back to this community that helped me in so many ways.”

Run by Nottinghamshire YMCA, YMCA Digital is a media focused programme built to encourage youth creativity and encourage young people to grow in their craft and confidence. You can find out more about the programme by visiting nottsymca.com/digital or by emailing studio@nottsymca.org.