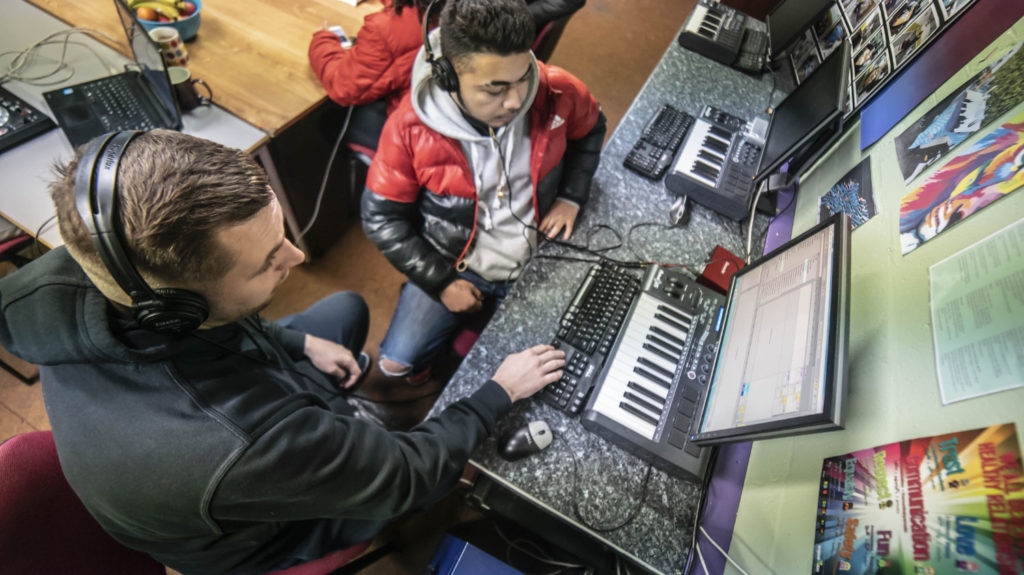 We teamed up with SEND Project to engage young people in Nottingham with creative experiences, music workshops and media courses The Sneinton-based studio continues to grow year after year, reaching out to more people than ever before.

Read the LeftLion Magazine interview with Moon Cavanagh and Gaz Frost to find out how their music projects help young people and vulnerable adults in the city.

YMCA Digital teamed up with SEND Project to engage young people in Nottingham with creative experiences, music workshops and media courses The Sneinton-based studio continues to grow year after year, reaching out to more people than ever before.

Read the LeftLion Magazine interview with Moon Cavanagh and Gaz Frost to find out how their music projects help young people and vulnerable adults in the city.

What is Send Project all about and where did it start?

Moon: There was a bit of grief on my street in Sneinton when some lads took offence at me for some reason. I had a chat with them; they were just bored, so we ended up writing some music with them, showed them how to DJ and that kind of thing. It stopped the trouble and snowballed from there. We started to work with more and more young people in the area, but I realised that I couldn’t keep doing it in my house. I met Gaz, who said: “Why don’t we do this properly?”

What kind of challenges do you think Nottingham’s young people and vulnerable adults are faced with today?

Moon: How long have you got? Growing up in a city brings you so many challenges. You get much less downtime, the pace of life is faster and expectations are higher. The political and economic state of the country is as challenging as it’s ever been, and people know that the only control they have is in their immediate environment. It doesn’t mean that one person can’t make an effective change, but it has to happen in an environment that’s realistic. That’s a real challenge for young people: putting themselves outside of their immediate circumstances, finding that they have value, and knowing that they can make a change.

Gaz: On a more basic level, it’s opportunity. When I was young there were a lot of initiatives where you could go and chill with your mates and learn something. I used to go to youth clubs in Bestwood, Redhill, and Top Valley. Now, those places don’t even exist. I don’t think there’s a place where young people can go and have three or four hours in a safe space, where they don’t have to worry about what’s going on outside or what they need to do, they can just jam.

What benefits do you think will come from your new partnership with YMCA and CRS?

Moon: There’s so much experience and expertise between those two places. There are a lot of things that we do well here, but there are things that we could do better.

Gaz: In terms of physical studios, it’s about being able to go to a different place to work. A lot of it’s to do with getting people outside of their postcode to explore what opportunities are out there. In that sense, it’s great to spread out a bit.

What do you think it is about learning skills in music production and creative arts that helps the emotional development of people in a community?

Moon: Our tagline is “Enjoy, Creative, Achieve”. Do something you enjoy, create something. The fact you can produce something and say “I made that!” is rewarding. With the lads we worked with on my street, that brought its own rewards. The incidences of nonsense went right down, because they had something to do.

How will this scheme help families as well as the individuals that take part?

Moon: We’ve had letters and thank you cards from families telling us that we’ve made such a positive impact on this young person’s life. It’s really heart-warming because it’s so genuine.

Gaz: They see them in a different environment. We might only get to work with them in a specific setting, but they’ll see them outside of school when they come home gassed about the work they’ve done, and see the changes being implemented from that.

Moon: You can speculate as to what difference making music has, but we’ve got proof in that people have actually contacted us. In at least a handful of cases, it’s made a real change in other aspects of their life and that’s really what we’re after.

What do you see happening for Send Project in the future?

Moon: We’ve just had a project funded by Youth Music, who I can’t speak highly enough of. The pilot project is with the community music organisation, and is still in its infancy, but we see it growing and becoming a really important part of the musical and cultural support system in Nottingham.

Gaz: I think Send is definitely something that should be accessible all over the city, not just in the areas that we work. I just hope we can start to do a bit more work with more people in Nottingham.

Moon: We’re not looking to build an empire, but there are cold spots all over the city that shouldn’t be that way in this day and age. They’re no less deserving in Aspley or Bestwood than they are anywhere else.

When do the sessions run and how can people get involved?

Moon: We run a Sound and Vision project on Tuesdays, and have placements in the daytime for young people between 16 and 25 who are not in employment, education or training, where the focus is on employability skills. Then from 5.30pm to 8.30pm on Tuesday evenings, we run our Sound and Vision music mentor programme, where we’re focusing mainly on music goals.

On Friday evenings between 4pm and 6pm, the Nottingham education, employment or training is open again. We have started to get a lot of calls recently from places like supported housing, youth offending or care teams; these are the places we’re targeting, to let young people know that this is a possibility. Often, they’re the most vulnerable and need the most support. Ultimately we’ll speak to any young person that’s interested and we’ll find a way of working with them.

Find out more about all of the amazing oppertunities for young people with YMCA digital by contacting studio@nottsymca.org.