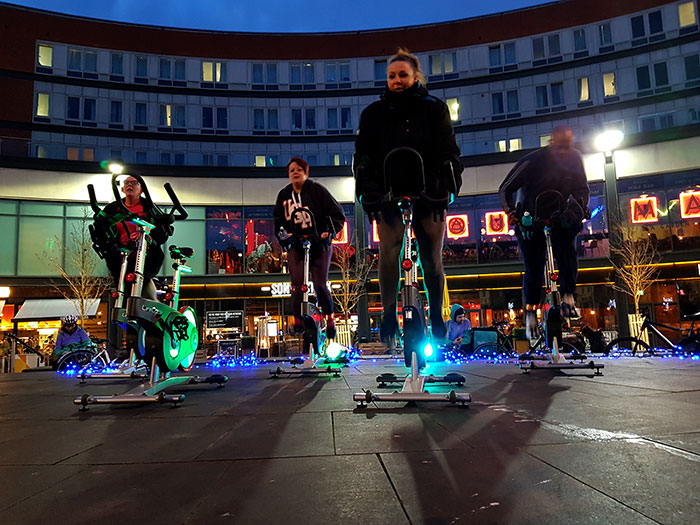 On Friday 23 February, Nottinghamshire YMCA gym braved the ‘Beast from the East’ and headed out into the cold to host a couple of Light Night 2018 events.

Light Night is a free multi-arts and light festival which takes over Nottingham City every February. For our part, we wheeled six bikes over to Trinity Square, raised our banners, hooked up our lights and by 5.30pm we were ready to rock! Accompanied by some great, heart-pumping tunes, Nottinghamshire YMCA coach, Callum, put a group of hardy souls through their paces and as darkness fell we lit up Trinity Square.

Later, as it grew even colder, YMCA’s Danny Graham headed a band of spirited runners, leading them around the City, taking in many of the sights and sounds this annual festival of light had to offer. From spectacular projections on some of Nottingham’s iconic buildings to interactive installations, exhibitions, dance, music and street performances.

With the illuminations now dimmed for another year, we look forward to being a part of Light Night 2019… only bigger and brighter!

Find out more about the Nottinghamshire YMCA gym here.