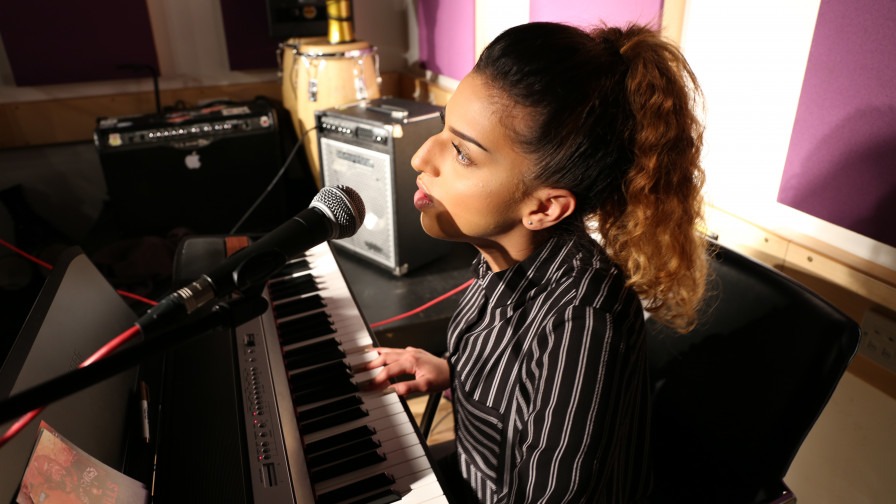 Funded by the National Foundation of Youth Music, the initiative brings together young people from socially excluded backgrounds to encourage and nurture creativity in a safe, engaged and non-judgemental space.

With interest in the project quickly growing, Shaan shares below what these sessions entail and what the ‘Vocal Zone’ arm of this programme means for the young people who come through Nottinghamshire YMCA’s doors.

“Our YMCA Digital team has worked hard to plan a series of 10-week workshops which will best deliver their core skills to our young people,” Shaan explained.

“A different workshop theme is hosted every night of the week, with each session theme running for 10 weeks apiece, including: DJ Skills, Drum Clinic, Arts Award, Production Skills, Big Band and my own Vocal Zone. Our aim is to put on a wide range of workshops in order to cater to a variety of young people.

“The workshop series was initially launched to add consistency to our YMCA Digital youth sessions. Rather than host drop-ins, we thought it would be ideal to nurture a solid and more committed group of participants who are given the chance to become invested in their music craft via regular meetings.

“Little did we realise the project would evolve into something so much larger and become an incredible source of social inclusion and stability for our young people.”

Vocal Zone features structured activities including everything from learning basic vocal warm-ups and song-writing to understanding the technical names and elements to pieces of music from a variety of genres.

In preparation for the vocal workshops, Shaan developed a plan that consisted of breaking down each session into icebreakers, aims and outcomes to ensure structure and clarity for members.

‘YMCA Digital is about supporting each other’

“During our most recent workshop series, I worked with four participants to develop their core skills including confidence, song-writing and performance quality,” said Shaan.

“Allowing everyone to get to know each other through the use of icebreakers and general conversation during my first session proved essential to giving our young people the chance to feel at ease in the space and more comfortable to perform.

“Our YMCA Digital space is based on nurturing an atmosphere of mutual respect between members and Nottinghamshire YMCA staff, which works really well for setting a context whereby participants can feel happy to express themselves.

“I focused on creating an accessible environment by ensuring at the start of each session that everyone knew we were here to support each other and it is okay to make mistakes. The most rewarding aspect of leading this 10-week programme was watching our young people grow into themselves as artists as they built up confidence.

“As a tutor, I developed and learned a lot about ways to overcome issues and how to be a better leader for young people who are coming to this creative space from a wide range of different and sometimes challenging backgrounds.”

“One young person attended my first ever session who was struggling with anxiety, which resulted in them having a panic attack and crying uncontrollably.

“Having calmed the young person down and helped them to feel reassured and safe, we took things slowly until they were able to laugh and move away from feelings of upset in the supportive and unpressured vibe of the studio.

“This strategy began to work as I told them what to expect during the 10 weeks and all the potential opportunities there were to make new friends and gain new skills. Even so, they were not keen on performing at all initially, and shied away from the whole group with little interaction.

“By week 3 however, I was singing a karaoke song and invited the person to try singing a little bit – to my delight, they felt ready and confident enough to sing with my support. With lots of preparation, the young person was singing independently by the fifth week, and would not put the microphone down! This was a major step for developing their sense of self-worth and feeling okay in social groups.

“This achievement made me feel incredibly proud and I really enjoyed working with them to achieve such a fantastic goal.

“It is being part of these subtle but powerful life transformations in young people’s lives that make these sessions massively worth all of the hard work.”

Come along to one or more of the Young Creatives sessions by finding out more at YMCA Digital’s webpage.