After a quarter of a century of dedicated service, Nottinghamshire YMCA’s Joint CEO Will Wakefield has announced he is retiring to pave the way for the regional charity’s next chapter. 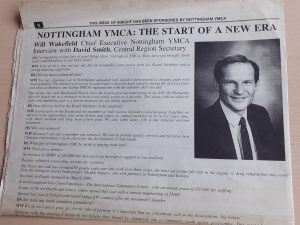 Having transitioned to share the title of Joint CEO with Craig Berens in August, October 2020 marked Will’s official last month heading the ship as leader of the not-for-profit children and young people’s charity.

“My decision to retire has been long in the making,” said Will, who first took up the CEO mantle at the charity in 1995. “With Nottinghamshire YMCA reaching a significant milestone by celebrating its 150th anniversary next year, I feel that now is the right time to step back and help our YMCA move forward by empowering exciting new leadership to take our charity into the post-COVID world. I have every confidence that Craig Berens will steer the movement in a direction of values-driven strength for the benefit of all in his new and very deserved role as Group CEO of Nottinghamshire YMCA.”

Born on the edge of the Kalahari Desert in Southern Africa, Will was armed with only £50 and four O-Levels when he headed to the UK to start a career in hotel management, before following a Christian calling and beginning work at a north London YMCA hostel in the middle of the 1981 Tottenham Riots. Will became Chief Executive Officer of Nottinghamshire YMCA in 1995, taking the not-for-profit charity’s turnover from £400,000 to exceeding £10million today to ensure delivery of life-changing services for our community’s most vulnerable members. 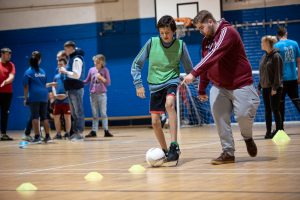 When Will first joined the organisation, the charity’s services extended to a hostel and youth service in Nottingham and often operated on a hand-to-mouth basis, with Will even taking to his sleeping bag in the hostel one night to ensure the service could be kept open. Today, Will’s people-centric leadership has seen Nottinghamshire YMCA expand and diversify to support everyone from children and families through innovative projects such as YMCA Digital, Outdoor Education and Day Camps to providing 24-hour care homes for at-risk young people and supported housing for homeless individuals across Nottingham, Worksop, Mansfield and beyond.

Double Impact Drug Recovery Services was also formed from the YMCA with founder Tony Herbert in 1998. Will remains a trustee to this day and is proud the project’s impact has served thousands across Nottinghamshire and Lincolnshire.

‘YMCA is about becoming more than we are’

Will explained: “From that struggle in the early days and through the hard work of our phenomenally dedicated team (which is ongoing to this day), we can roll the camera forward to a time that now sees us supporting a record number of people across Nottinghamshire and East Riding of Yorkshire.

“To me, ‘YMCA’ is about each of us becoming more than we are and being the ultimate bridge builder between different faiths, ages, races and financial backgrounds. I hope this mantra continues to be championed by new generations of YMCA employees and supporters as they work together to build an even greater tomorrow for our communities. I stand on the shoulders of those who came before me, and I would like to personally extend my most heartfelt gratitude and thanks to each supporter who has made – and continues to make – our community a caring, respectful, honest and responsible place to live and work.”

Looking to the future 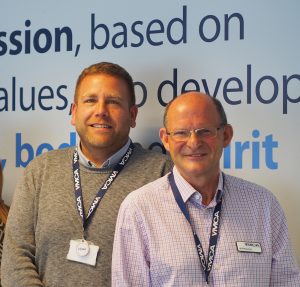 From November, Craig Berens will officially take the baton as sole CEO to lead Nottinghamshire YMCA’s future as a champion for positive social change.

“The phenomenal legacy Will has created through his local and international initiatives alongside his imperishable community spirit will leave a lasting imprint on our charity’s heritage,” said Craig Berens, Joint CEO at Nottinghamshire YMCA.

“I hope to honour this legacy by empowering transformational projects such as our new Community and Activity Village in Newark, the evolution of Malt Cross into a thriving community and events hub delivering training opportunities for NEET individuals and the expansion of services in East Riding of Yorkshire to support even more vulnerable people.

“Will’s people-centric style of leadership has educated the direction and very heartbeat of our movement. As I step into his enormously respected shoes, I feel deeply humbled to look to the future and build upon his pioneering vision to inspire meaningful community change.”