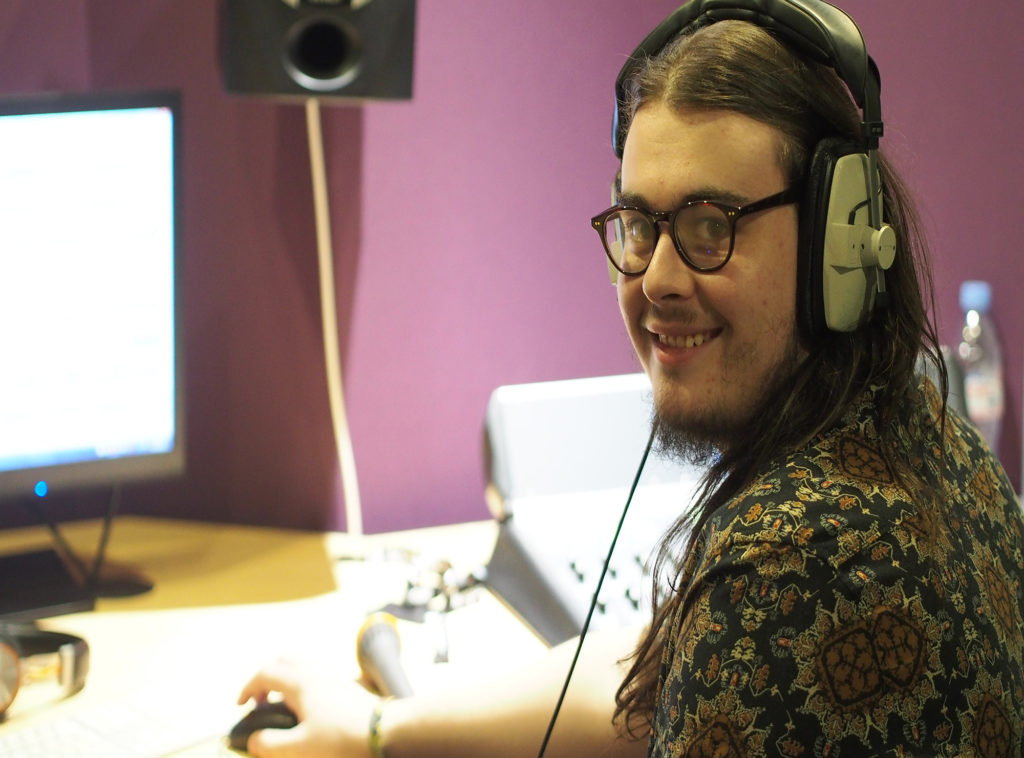 YMCA believes in the creative potential of young people’

Volunteer EJ Scanlan shares below why he first got involved with YMCA Digital’s city centre hub, which is run by Nottinghamshire YMCA to encourage youth creativity, and how the charity helps him and other young people to grow in their craft and confidence.

Having started out as a young participant at YMCA Digital, Ethan Scanlan – more commonly known as EJ Scanlan – has now been a presenter for the charity’s live radio show for four and a half years. He has developed into a valued volunteer to support other young people on their creative journeys and recently became an official YMCA staff member.

“My first taste of YMCA Digital was when the team came to my school to work on creative projects,” EJ explained. “I then became more involved with the charity through Dyslexia Action in 2012. It opened up new horizons of what could be achieved.

“Having been bullied at school, confidence is not something that has always come easy to me. I’ve always loved music and even ran my own small radio show (‘Phresh Radio’) for a while, but YMCA Digital has given me a greater platform and the support I needed to rebuild my self-esteem to interview bigger up-and-coming artists.”

Before going off to university in London to study theatre, EJ used to be very outgoing, but his time in the capital caused him to develop chronic social anxiety.

“The experience crushed my confidence and resulted in me eventually dropping out and coming back home because I struggled to cope,” said EJ.

“YMCA Digital welcomed me back with open arms, and helped me with my recovery process. I’m still recovering, but if it hadn’t been for them I don’t think I would have come this far with re-establishing my confidence. We really are one big family at YMCA Digital!

“It was actually the show’s longest serving presenter, Will, who got me involved with the radio station – he has been such a great friend to me ever since. My love for music expanded and, without Will, I would never have been open to experiencing new things.

“As a radio host, I’ve learned that it’s my job to help guests on the show feel comfortable because that creates a more organic and better conversation. So far I’ve had the privilege of interviewing some great artists ranging from up-and-coming bands Airways, Dream Wife and Super Furniture to some massive bands such as Steve Hackett from Genesis, British Rock band, Deaf Havana and leading ABBA tribute band, Bjorn Again.

“We work hard as a team to produce some high-quality interviews and content whilst having fun doing it – it’s about getting a real buzz going!”

When he is not identifying the next big artist, mixing tunes or broadcasting reviews of albums and films, EJ can be found backstage at festivals and music venues around Nottingham interviewing musicians. He even found time to complete a nationally-recognised Arts Award accreditation, a programme supported by the charity.

“These opportunities have massively increased my confidence to take on bigger things,” said EJ. “I was lucky enough to go backstage of Nottingham’s annual Splendour festival to interview performer Nina Smith, who actually used to work at YMCA Digital!”

As a volunteer, EJ now supports other young people who attend the sessions with mixing their own music and creating bespoke productions that explore their interests.

“The range of projects is fantastic,” said EJ. “We even helped one of our young people create a podcast on Horrid Henry – nothing is off limits! Developing research skills is essential for delivering a show successfully, and a lot of hard work goes into the process.

“YMCA Digital awards young people a platform to express themselves and build their self-esteem in the knowledge their voice matters. Through volunteering, I hope to help drive young individuals to pursue their creative passions in a constructive way and, most importantly, without judgement.

“So often people will say that the pursuit of music will not lead to ‘a real job’, but for many of our hub’s young people, music is their life’s passion and their talent and ability to achieve is real.

“Rather than stemming this unharnessed creative expression, YMCA Digital creates a safe and positive environment for young people to learn real industry skills in music production. Participants feel comfortable to express their inner person while experimenting with new sounds to hone their talent and work towards an Arts Award that will help to set them up for a career in the field.”

YMCA Digital recently finished its Rising Star Project, which sees radio hosts take on the challenge of identifying who will be the next biggest artist out of an array of up-and-coming figures. The station’s presenters form a judging panel with the listeners voting in their favourite performers. Indie band Airwayswon the award, with international popstar Billie Eilishand singer songwriter Lewis Capaldicoming in the top three. East Midlands artists Camille Christel, Georgieand Easy Lifewere also featured on the list.

With plans to create short films, EJ is now also heavily involved with the charity’s new Young Creatives Live radio show, which airs online every Monday at 4pm to promote the voice and talent of young people across Nottinghamshire.

“Young Creatives gives our participants a platform to make their talent and ideas heard by a real audience,” EJ Scanlan explained.

“To believe in a young person’s potential and award them the support and facilities to grow and shine is such an important thing. We have some immensely talented people down here – you can’t put a price on boosting an individual’s sense of self-worth.”

EJ Scanlan’s main show airs every Thursday from 18:00 on YMCA Digital. Tune in online here or find out how you can get involved or volunteer at YMCA Digital by emailing: darren.goodlad@nottsymca.org.