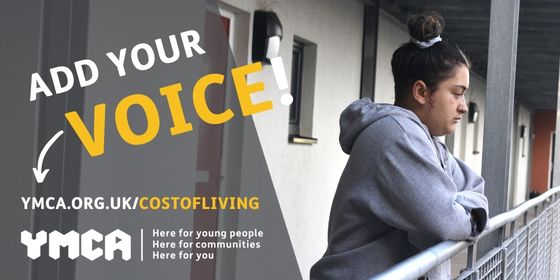 Eating a meal or keeping warm: the true cost of living for young people 

As the cost of living crisis intensifies, a report launched today by YMCA warns that the health, wellbeing and future prospects of young residents are under threat, with no proposed Government support in sight.

YMCA’s ‘Inside the cost of living crisis’ report was compiled using focus groups within supported housing, and reveals that alongside increased reliance on food banks and donations, young people in supported housing are now having to decide between skipping meals entirely and keeping warm as they head towards a difficult winter.

Aspirations have also been forced to a halt as young people who had planned to move on from supported accommodation no longer felt able to take that risk, and those struggling daily to secure stable employment now face uncertainty over the future of vital benefits.

Financial resilience amongst young people on benefits is low overall, with many already in high levels of debt, but some in supported housing now find themselves exempt from the proposed £400 energy rebate which would go a substantial way to improving their situation.

Unsurprisingly, the mental health of young people has also declined as a result of the cost of living crisis, with many feeling unable to do anything social or even use public transport because all they can afford to do is survive, leaving them trapped and isolated.

“Even before the cost of living crisis hit, young people in supported housing found themselves disproportionately affected by financial strain and limited job prospects. Now, they face having to decide between eating and staying warm, alongside increasing uncertainty over threats that risk plunging them even further below the poverty line, and fighting damaging stereotypes when trying to secure work.

“Not only are these pressures significantly impacting the health, wellbeing and opportunities of young people in supported housing, the lack of support from Government risks leaving them more desperate and disillusioned than ever.

“If Government really aspires to help those most in need to secure the employment they are so desperate for and achieve financial stability, they need to help young people establish the confidence and independence to do just that. Our campaign calls for urgent action.”

YMCA is calling on Government to rethink its approach by updating welfare benefits in line with inflation, and increasing funding to provide local authority grants to support local needs, such as food and winter clothes vouchers. Government must also amend rules around the £400 energy rebate to include those living in supported housing, and address the systemic issues with moving on from supported housing, as well as the barriers faced wen trying to get into work.

Add your voice to YMCA’s campaign today to support young people and help end the cost of living crisis.

YMCA is the largest voluntary sector provider of supported housing for young people in England and Wales, providing a bed for 8,800 people each night and collectively helping more than 20,000 people experiencing homelessness each year.