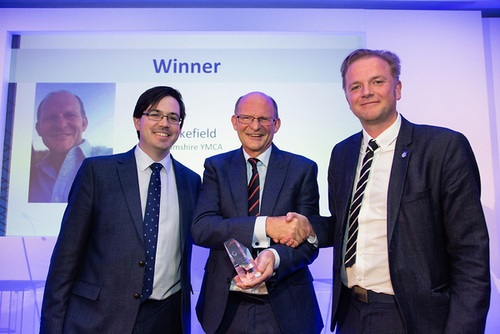 Double celebration as YMCA CEO crowned ‘Leader of the Year’

Nottinghamshire YMCA is proud to announce the charity’s Chief Executive Officer, Will Wakefield, has walked away with not one, but two top accolades at this year’s East Midlands Leadership Awards.

The inaugural awards ceremony, hosted at the Crowne Plaza in Nottingham on Wednesday 6 November, attracted an audience of 150 guests who turned out to support our community’s top leaders.

Will Wakefield, CEO at Nottinghamshire YMCA, was unveiled as a double winner – triumphing in the Public and Third Sector Leader category before being crowned overall ‘Leader of the Year’ across all sectors in the whole of the East Midlands.

This honour recognises Will’s contribution not only to growing the charity – which supports vulnerable adults and young people through services promoting healthy living, youth development and social responsibility – but to our wider community and the Malt Cross venue, which the charity saved from closure last year.

Born on the edge of the Kalahari Desert in Southern Africa, Will headed to the UK armed only with £50 and four O-levels to his name. Having started his career in hotel management, Will decided to follow a Christian calling and found himself working at a North London YMCA hostel at the time of the 1981 Tottenham Riots.

Having joined Nottinghamshire YMCA as CEO in 1995, Will acclimatised well to Nottingham life. It was through his strong leadership skills and compassionate sense of human individualism that he has been able to transform this YMCA from a turnover of £450,000 to £10million today. This enables the charity to provide life-changing frontline services not only for homeless people but also developmental opportunities for young people across the region.

“I am somewhat humbled by these awards and I stand on the shoulders of past YMCA heroes,” said Will Wakefield, who has devoted almost 32 years to the movement.

“I am surrounded by a formidable team and truly believe that YMCA is about becoming more than each of us are – building strong individuals, families and communities. The YMCA is needed as much now as it was when the charity was founded 175 years ago.”