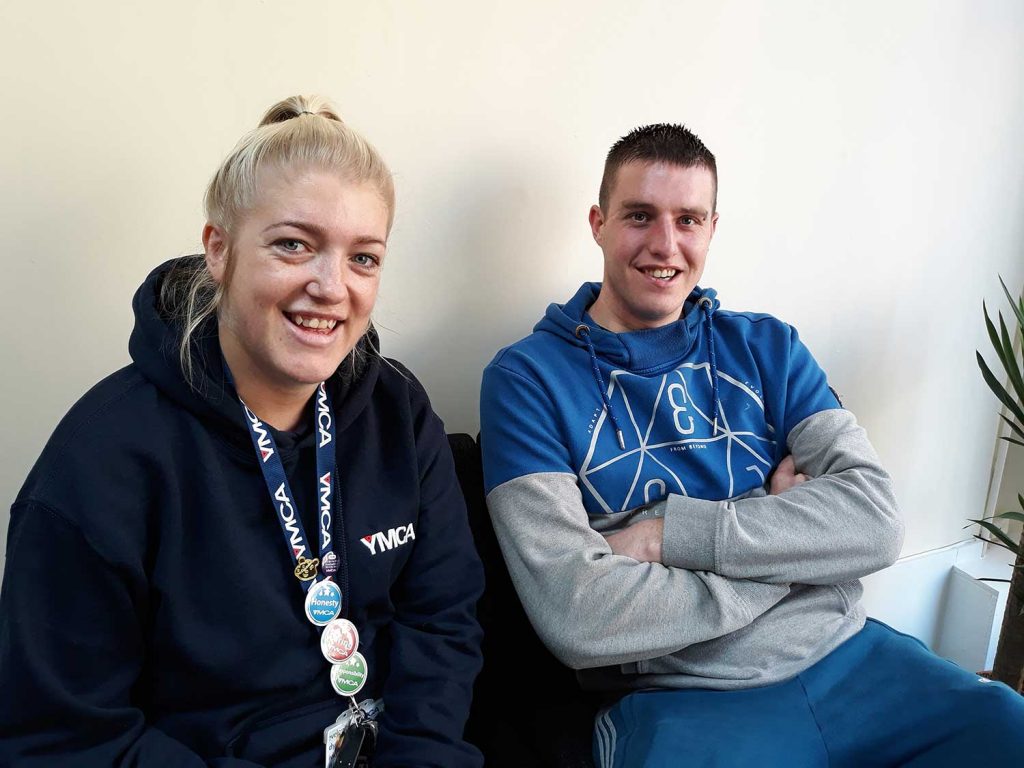 A Dad’s story: Rebuilding life after prison and homelessness with YMCA

Jordan Jarvill, 27, was living with his partner in Worksop with a baby on the way when substance misuse problems escalated him into a life of crime, prison and homelessness.

After getting clean and then receiving support from Nottinghamshire YMCA through living at the charity’s housing service in Worksop, Jordan is now rebuilding his life as a devoted father as he works towards re-joining his family.

Getting clean was the first step

“Originally from Gainsborough, I moved to Worksop to live with my partner, but my drinking and drug use grew out of control,” Jordan explained.

“I began heavily drinking alcohol when I was 16. Over the years, I’ve given my Mum and Dad no end of trouble, but I’m sorting things out and now I look back and think – why could I have not made these positive life changes sooner?

“Getting drunk, taking cocaine and burning through money got me into debt. Things came to a head this year when I made threats to kill someone while armed with a knife.

“Serving a prison sentence was a turning point and I decided to stop taking drugs completely. You’re supposed to wean yourself off drug or alcohol reliance, but I detoxed so quickly that I was found half-dead in the prison cell and they had to call the paramedics.”

When Jordan was released from prison on 30 August 2019, the complexity of his life situation left him homeless.

“It was hard,” Jordan admitted. “I ended up homeless for around a week – sleeping under bridges in Worksop and then on my mates’ sofas, but they have children and it wasn’t fair on them for me to stay there too long.

”Homelessness felt like the only option when I left prison as moving back in with my partner would have meant my children being put on a protection plan because of my recent criminal record. My kids mean the world to me and I would rather be on the streets than put them in that position.

“The local council couldn’t help me because I’m from Gainsborough, but moving away from Worksop would mean leaving my partner and new baby behind. I just couldn’t leave my family.”

‘Without YMCA I would probably be dead’

Jordan was referred by the council to Nottinghamshire YMCA for support. The charity’s Lead Tenancy Support Officer for Worksop, David Southgate, helped Jordan complete the paperwork needed to begin living at the YMCA’s supported accommodation.

“I badly wanted to prove to everyone that I could do well for myself and my family,” said Jordan. “Since prison and living at the YMCA I’ve stayed clean of alcohol and drugs.

“This success has also meant I get to see my children and family more, and social services are now looking to allow me to move back in with my partner. Having the worry of social services hanging over my head made me paranoid; but I’ve proved them wrong by attending all my appointments and working through the steps I need in order to be reunited with my partner and baby.

“Without YMCA I would probably be dead; six feet under. Whatever I needed to get myself moving forward – David Southgate and the team supported me. Even the charity’s night cover staff have been really good to me; if I ever needed anything, they would willingly give their time and help.”

Last month, Jordan’s positive progress meant he could move out of the main hostel and into a YMCA transitional shared house, because he no longer required such intense support. Jordan is now investing his focus into one of his life passions of keeping chickens and ducks on his family’s land.

“I had to give up my pets when I moved to Worksop, but I’ve just given my parents 19 birds and I help care for them,” said Jordan. “The chickens and ducks give fresh eggs, which I’ve started selling for 75p each – the money raised goes back into caring for the birds by paying for their food.

“Like anyone, it’s important for pets to have somewhere to feel safe so I’ve just spent three days building them another larger shed where they can roam more freely and be warm.

“I was also recently diagnosed with severe autism and ADHD. I’ve always been someone who needs to be moving around and doing something practical so having a focus is good.”

“If you’ve got children, you don’t want your kids growing up thinking ‘my daddy is a drinker’, or worse: ‘my daddy chose drugs over me’ – I don’t want my children looking at me and believing that is true,” said Jordan.

“The YMCA team have been really great throughout my journey. I’m not even living at the central hostel anymore and yet the second I walk through the door the team gave me free sandwiches and a warm welcome.”

David Southgate, Lead Tenancy Support Officer at Nottinghamshire YMCA’s housing service in Worksop, said: “Jordan is clearly a devoted father whose engagement with our services and hard work to become a role model for his children has really paid off.

“Being released from prison or any institution can be an incredibly daunting experience, but to immediately face homelessness and the prospect of losing contact with your child is unthinkable.

“When Jordan first came to us, it seemed his world was on the floor, and I’m so proud of the fantastic progress he has made towards regaining independent living for himself and his family.

“We just want people to know that Nottinghamshire YMCA is here not only to provide a roof over a person’s head, but to offer the key worker support needed for them to take each step towards reclaiming their independence. Jordan is a fantastic example of the positive outcomes that can be built when you reach out for support and believe in yourself.”