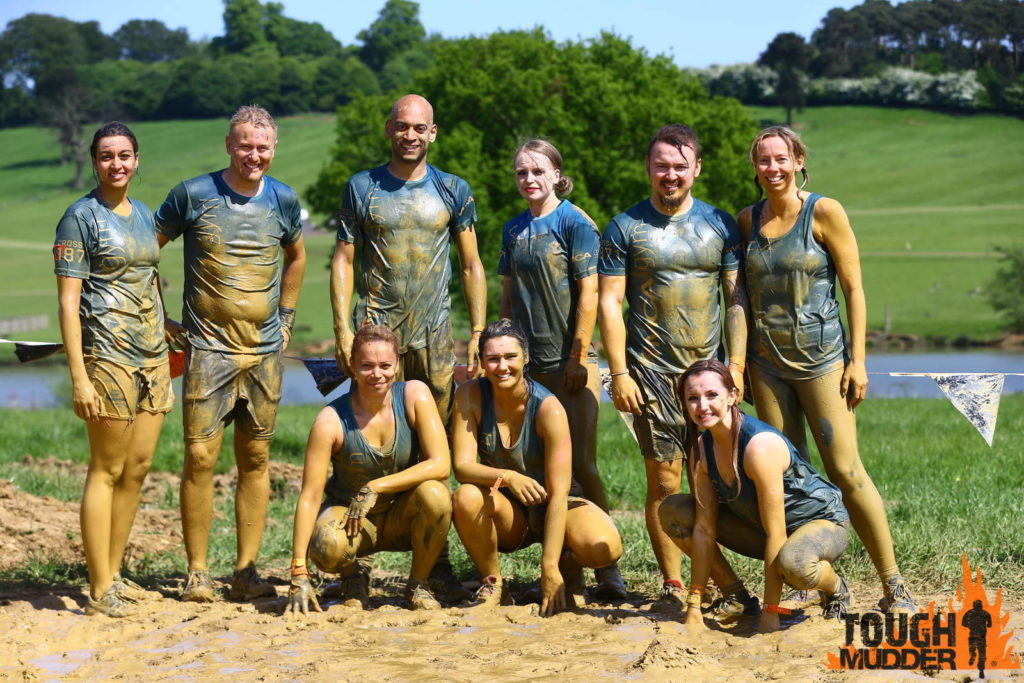 Wow! What a day Sunday 20th May turned out to be. A team of nine is the largest I’ve ever been in for Tough Mudder (TM) and as a result it was the best I have completed yet.

As the team arrived at Belvoir Castle for the run, everyone seemed nervous and excited at the same time. It being my third TM and knowing what to expect, I was particularly nervous. Odd, I know, as often there is a fear of the unknown, but not in this case. After many toilet trips between us all and watching as the first finishers crossed the line, we were next.

And so it began. In the holding area before the warm up, we were ready; race numbers drawn on our faces and a buzz of excitement surrounding us. The clock struck 11.45am, signalling it was our time. Hearts started to race. Fast.
We entered the warm up pen close to the front, and immediately received a shout out from the announcer when he spotted YMCA Gym emblazoned across the front our vests and t-shirts. Then the standard, always crazy, warm up began. Irish dancing was the theme this year. Random people were pulled into the centre of a huge circle of fellow runners to do a warm up dance and our run leader, Danny G, was picked first! The Running Man and Two Step were his trademark moves, both receiving a well earned roar of laughter from our part of the circle.

After the warm up there follows the famous Tough Mudder pledge. Everyone has to kneel, hand on heart, to pledge allegiance to their teams. Also, to not whinge or moan about any obstacle and to conquer fears. Once completed it was time to set off, our path down into the woods bathed in the orange glow of smoking flares.

The first obstacle was waiting for us which involved climbing over a slanted large section of wood. Teamwork was called for. This set the trend for the rest of the day and this team effort was what made the day so special for me. After helping each other over that first obstacle, we stuck together for the rest of our journey. We encouraged one another when the going got tough, and we laughed together as we tackled the more fun obstacles.

I am sure you would like to know which obstacle was my favourite?
Easy – the Block Ness Monster. Absolutely fantastic!! It involved sliding into water and wading across to a rotating triangle, that as a team, you had to hold onto to be pulled up and then, push down on the other side to get all of your team mates over. The positioning on the triangle is key because you don’t want to be going in head first; muddy water up the nose is not a pleasant experience. Nevertheless, we laughed and working together as a team, everyone got over the blocks! This year we had to do it twice, which was a bonus!

My least favourite obstacle has to be Arctic Enema. Unfortunately, my dislike stems from past experience when I had to be pulled out by medics after going into shock. Twice.
Not to put you off of course! Everyone’s reaction is different and the majority of our team were absolutely fine. The advice is to persevere through the cold and just keep focussed. The obstacle is basically sliding through a tube into ice cold water, going underneath a bollard to the other side and climbing out. Sounds simple, but as I said, my previous encounters have been pretty horrible.

One element of the course that stood out was Pyramid Scheme, surprisingly now the final obstacle. Previously placed at the halfway mark and the three quarter mark, this was never an obstacle that really blew me away. However, its new position showcased the amazing effects of teamwork and how important it is on a race like this. Everyone helped each other up the steep slope to the summit and clambered on shoulders, even holding onto random legs to reach the top. Also, it wasn’t just our own team that helped, as other competitors stayed to lend a hand. After we all reached the top, I could see the finish line and suddenly became overwhelmed with emotion.

Standing there, drained and elated on top of the Pyramid Scheme, I felt a sense of hitting the heights of achievement, both physically and metaphorically. We had done it!

For those of you that  want to join us at Tough Mudder next year, keep in mind the following –