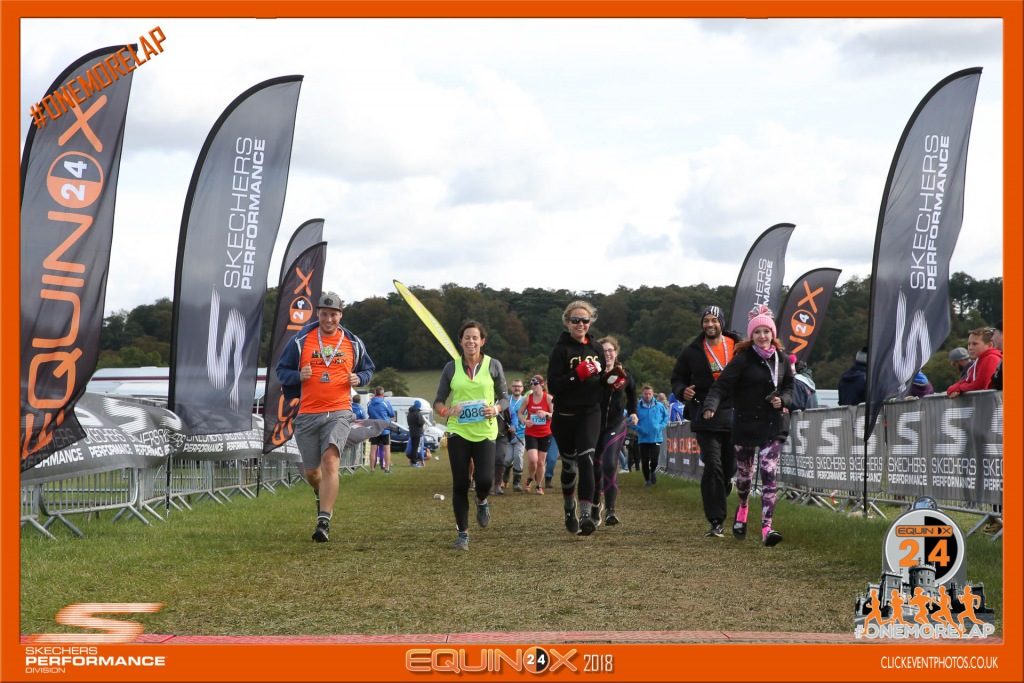 This year, myself and a team of six runners (2 staff and 4 members) took on Equinox24, a 24 hour run around Belvoir Castle in Leicestershire. The aim, as you might have guessed, was to complete as many 10km laps as possible in the 24 hour event.

Before that though, we had the small matter of the Beer Mile run to contend with. Rain had already fallen during the day, causing the terrain to be very slippery under foot. That, combined with beer, was a recipe for potential disaster. However, this unexpectedly ended with myself and Alison in second and third place! We received a trophy and a podium finish photo. I didn’t realise a beer mile could be taken so seriously.

It was time then to get a good night’s sleep. The following day was the start of our marathon task, quite literally. 24 hours of running, kicking off at 12pm on Saturday and finishing at 12pm on Sunday.

And so, the following morning came around. Danny was first up at 12pm. We all waited as a team to cheer him and the many other runners on as they left the start line. That was when the nerves kicked in for me – I was soon going to be running for my life! On the walk back to our home for the weekend, our lovely motor home, it was time to continue to load our bodies with carbs in preparation for our start time. I had the position of running 6 out of 6, so had much time to mentally prepare myself.

The order was as follows – Danny, up first, followed by Alison, Tom, Jane, Laura and then me. The first laps resulted in us being way ahead of schedule even by the second runner Alison. Unfortunately, for Tom and Jane’s first run pelting sheets of rain came pouring down, proving difficult in running conditions. Nevertheless, both persevered and stayed strong. Then, it was my time to make my way to the handover pen.

When each person came back from running the 10km course, every single one mentioned THAT hill. Of course there was NOT THAT hill to contend with as well. THAT hill was a steep incline whereas NOT THAT hill was a steady incline which seemed to go on forever (or so it felt like towards the end of the 24 hours). I was quite proud of myself for keeping a good pace throughout each lap, taking on each hill to the best of my ability. The course was a tough one that’s for sure.

Then, the second laps ensued. This was when the head torches came out, as per the race rules. It was especially hazardous as the course was so wet from all of the rain. The darkness to contend with was an extra challenge. This was trail running at it’s hardest. My next lap was after Laura at about midnight. Never have I experienced running in such darkness – at times it felt very isolated, very quiet and a bit scary. It was a mental challenge having to maintain concentration for foot placement and a physical challenge for the knees, especially when bracing for the steep slope before THAT hill. Tom really enjoyed the night run and enjoyed the slight risk element to it. Jane on the other hand was not looking forward to the night run but then came back having quite enjoyed it!

Now the early hours of the morning were kicking in – the toughest hours for me. I remember getting in during the early hours and doing my routine foam roll after my second run and thinking, ‘I must be crazy’. I felt my way over to the showers in the dark and, after tripping over a tent string, made my way back to the motorhome. I found Jane awake waiting for her next shift, sucking on some popchip crisps rather than biting them (in an attempt to not wake the others up). We then proceeded to talk and I then tried to go back to sleep, which was a failed attempt. My mind was constantly switched on, every time I heard the door open, marking someone back from their run, I would be counting down the hours until my next run.

On my third run, I did not need my head torch anymore – 6.55 in the morning and the sun was rising, and I could see my footing clearly. This was a brilliant run for me, reassuring because I could see where I was going but also because I knew the finish line was in sight for us all. The chilly breeze was wonderful during this time.

And so, onto everyone’s final runs! The last few hours were falling in fast. Danny set off on his final run, followed by Alison, Tom, myself and then Jane to finish us off. The final run was a rush of emotions stemming from determination. I tried to run the final lap as fast as I could so we could get Jane in for the last lap with time to spare. My hip flexors were getting tight by this point and my mind was all over the place – what 24 hours can do to you running on no sleep! I was thinking about my loved ones waiting for me at the finish line towards the end to get me through, and it worked. I finished on a high and handed over to Jane to finish the race.

And what a fantastic finish for Jane, we all waited at the finish line to run in with her, cheeking her on and giving giving her tonnes of high-fives.  That will be a moment that will stay with me for a long time. Seeing the whole team with smiles on their faces and radiating confidence and pride was the best feeling in the world.

It was intense, it was hard, it was challenging. And would I do it again? Of course I would!