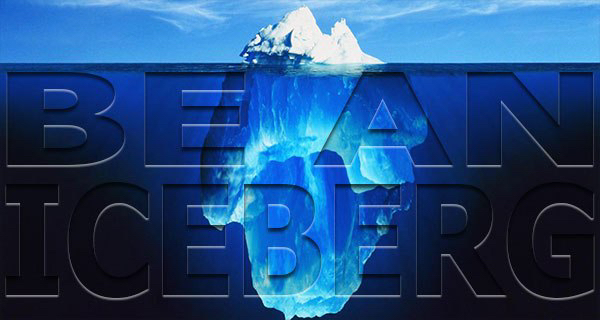 I don’t mean this in the literal sense; you throwing yourself into freezing water, letting yourself be blown around by winds and the currents (although this guy has some good tips if you want to do that).
No, I am talking about being more than what people see. Over 90% of an iceberg isn’t visible, you only get to see 10% of it as it floats about.
We all follow on Twitter or Instagram people who we think are pretty awesome – whether it’s a famous sports person, film star or singer; we follow them because we like what they have achieved, or what they can do. We follow their success, or their 10% as it were.

I love reading about athletes, about their training, especially Olympic athletes. They train for four years to compete in an event which will last them no more than a couple of days, and we all get to see them perform. We get to see their 10%. We very rarely see them in real training – in the ‘day-to-day’, through the ‘sweat, blood and tears’. We miss the times they throw up after a really heavy session; the times they just want to give up, the times they are too tired to eat the right food and the times they have had to take it easy because of injury. It’s because we only see the 10% that sometimes we can get frustrated when things don’t go the way we want them to. Whether that’s within our exercise and not being able to lose that extra bit of weight, not being able to lift that bar for one more rep, or not getting to where we would like to be quicker. We get frustrated because everyone else around us seems to be able do the things we want to do with relative ease, totally ignoring their 90%.

A great Roman poet, Ovid, once stated “nothing is stronger than habit”.
What makes that person so successful?
What makes them be able to do what I can’t?
If you want the answer, just look at what they do.
Day in. Day out.

The truth is, it’s not because of some random, “I woke up one morning and boom, I was able to execute a 100kg deadlift”, or complete an unassisted pull-up (although, to some, this may come naturally). It’s about performing positive and healthy deeds, over and over, and over again. It’s waking up at 5am on a Monday morning to hit the gym. It’s preparing your meals for the week on a Sunday evening. It’s turning down that second or third beer. And this is not just for a couple of weeks or months. This becomes so ingrained in you that to do anything else would just be wrong.

I want to challenge you now. I want to challenge you to do something. Forget excuses and the reasons you tell yourself why you cant do something. What one thing, right here, right now, is the thing you most want to do?
Once you have figured it out – start training for it! Start putting things into place so at the end of this year, or next, you will be able to say “look what I have done”.

Everyone will be amazed and envious of the 10% you show them, never aware of the 90% you actually put into achieving your goal.

Are you ready to be an iceberg?